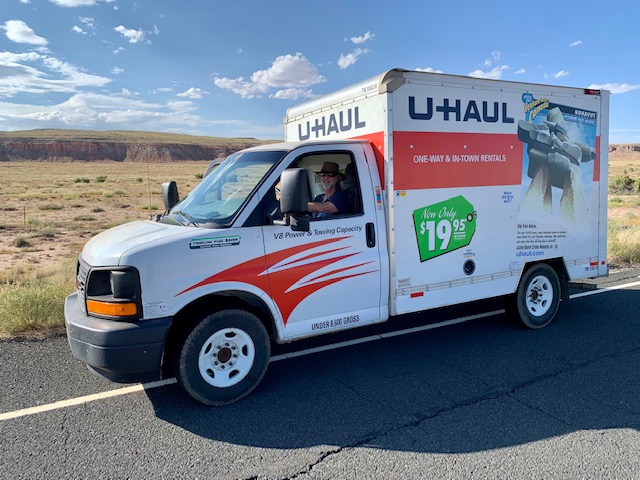 Michael and I had the privilege of delivering 300 backpacks to the Lukachukai chapter house on the Navajo Nation – a journey of 1000 miles. SSP volunteers and staff generously donated and assembled 25 for each grade, 1-12, filled with grade-appropriate school supplies. The backpacks were graciously and thankfully received and unloaded by members of the chapter house. According to our contact Paula, she will advertise their availability to the local families and then distribute them via a drive-through pickup day.

The Dine’ received a generous monsoon season this year, the first in eight years, which freshened the beauty of the entire reservation. There are however reminders of the years of drought in the countless dead and dying pinon’ and juniper throughout the reservation. Road improvements were encountered in several areas, slowing the trip, but inspiring optimism for the future. Yards and homes have received recent loving attention. Everywhere we stopped on the nation, people were wearing masks in solidarity and with dignity, a moving commitment to the health of their neighbors.

“Especially concerning has been the vulnerability of elders whose language and cultural knowledge are irreplaceable.”

The Navajo Nation is home to about 400,000 people. Covid-19 has hit Native communities harder than any other in the United States, with three times the hospitalization rate and two times the death rate as White communities.[1] Because the Navajo live in multi-generational families, crowded homes have put them in greater jeopardy. Especially concerning has been the vulnerability of elders whose language and cultural knowledge are irreplaceable. The urgency of the situation was evident in the signs and billboards we saw along the way urging people to observe COVID precautions.

We were surprised to see a few major projects under construction, most notably a modern, grades 1 – 12 school [Tsaile-Wheatfields], a hospital [Dikon Chapter], and new housing. We were told that this was part of the American Rescue Plan Act. As a way of allowing families to isolate during the pandemic, we also saw “tiny homes” that Navajo teams are building with the support of the Community Organized Relief Effort (CORE) and the Johns Hopkins Center for American Indian Health.

It was deeply gratifying and consoling for us to be part of SSP’s contribution to a wider effort to support and encourage the Dine’ people as they look to the future. 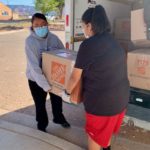 Community members unload boxes filled with backpacks that were assembled in Sacramento. 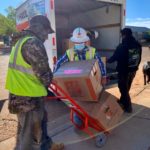 Community members unload boxes filled with backpacks that were assembled in Sacramento.

Editor’s Note: Thank you Chuck and Michael for delivering the backpacks and telling your story in our annual newsletter, and to the many SSP supporters who contributed $18,000 worth of school supplies that were assembled into 300 backpacks. Join SSP next summer for a hands-on service-learning week in Tsaile, AZ. Volunteers complete carpentry home repairs and learn about Navajo culture. See current spots available.

We are asking SSPers of all backgrounds to submit creative content so we can share a library of resources for community building in this season!