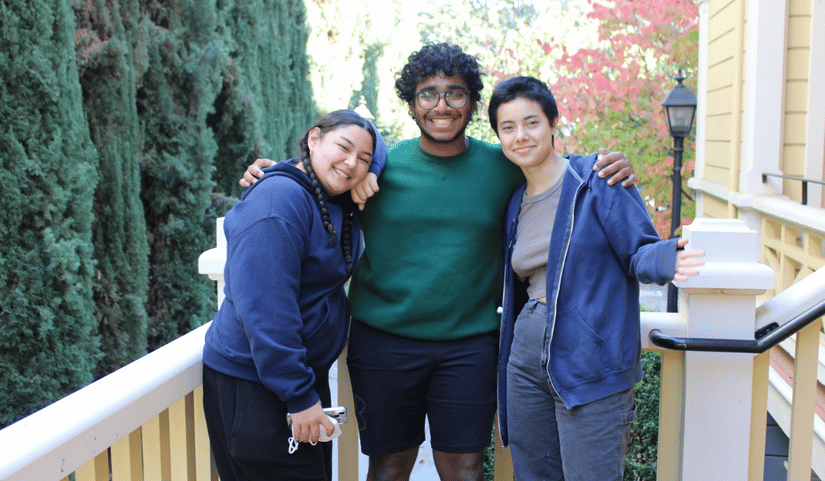 As a member of the Youth Advisory Council, I am excited to connect with other BIPOC youth [..] and assure them that their voice matters.
END_OF_DOCUMENT_TOKEN_TO_BE_REPLACED 2022 News: Presence in the Present

Before SSP, I perceived “God” as detached, sitting on a divine couch. I went into the trip hesitant. As the week continued, I came closer to recognizing what I was missing about the presence of God.
END_OF_DOCUMENT_TOKEN_TO_BE_REPLACED 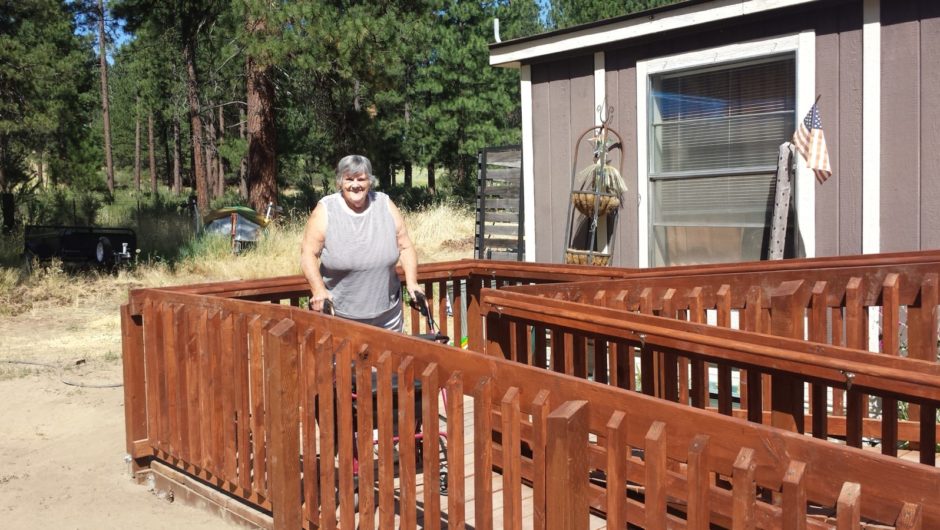 SSP Changed the Way I Look at the World 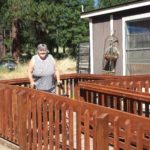 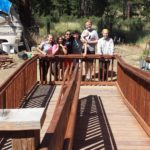 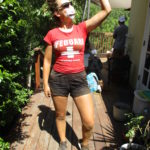 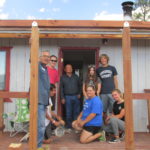 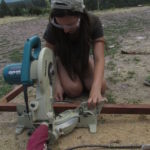 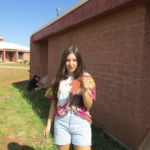 I reached a turning point the summer before my sophomore year of high school in 2015. It was my fourth time spending a week repairing homes with Sierra Service Project, and it was undeniable that each experience had been transformational for me. My experience in 2015, above all, played a formative role at a pivotal time in my life. I would set the foundation for how I respond to the world around me. I needed to decide who I wanted to become.

Grinning, I peered into Mrs. Martin’s home, an elderly Klamath woman who used a walker. Honored, I announced that she could now actually leave her house. My team had finally completed her ramp. She was no longer housebound. My team and I stood back and admired our handiwork, watching her beam with contentment as she used her walker to go down her brand new ramp. Never have I felt more like I was doing exactly what I was meant to – like it actually mattered.

Seeing the impact that I could make with just a chop saw and a week’s worth of labor, showed me that I had the power to make the world a better place. If I had the power to change this woman’s life, maybe I could change my own. I now knew that with simply my hands and my heart, I could be the change I wish to see in my community and in my world.

“I now knew that with simply my hands and my heart, I could be the change I wish to see in my community and in my world.”

Countless times SSP has opened my eyes to the world around me. SSP has shown me poverty in America, from the streets of skid row to remote indigenous communities. It has taken me to the U.S.-Mexico border, and into the lives of many whose world is far different than my own. SSP has shown me the person that I want to become, but more importantly, the people that I want to spend my life fighting for. My summers of service have affirmed I must fight for others, as we as a society succeed only when we all succeed.

This belief brought me to California Girls State, an American-Legion civics leadership program. I wanted to advocate for human rights and social mobility. I wanted to fight for the idea that no matter who you are or where you come from, you deserve the opportunity to fight for your dreams. On this platform, I was elected Secretary of State after delivering a speech to the 500-plus citizens. Up on that stage, I could make my voice heard, but I also could make those without a voice heard.

This would not have been possible without the courage and confidence I gained from SSP. Being a part of SSP created a framework of active empathy in my mind. We serve because we do not sit back when we see something we do not like in the world. Instead we get up, and fight to set the scales of privilege even, one ramp at a time, one garden bed at a time, one coat of paint at a time. It is this ideology of creating a world you want to be a part of that sparked my interest in politics. Not settling for a world of glass ceilings and socioeconomic barriers, but fighting for change and equal opportunity.

When I got up on that stage, I could speak the truths I had discovered through screwdrivers and spiritual sandwiches, from years of active service with SSP.

“SSP changed what I want to do with my life because it made me realize that I have the power to change the world around me.”

Sierra Service Project not only changed me, but it changed the way I look at the world. SSP changed what I want to do with my life because it made me realize that I have the power to change the world around me.

Editor’s Note: If you are looking for summer volunteer opportunities in Chiloquin, Oregon, or at any other SSP site, we still have space available for 2018! Groups, individuals, and even intergenerational (12 years old and up) are welcome. 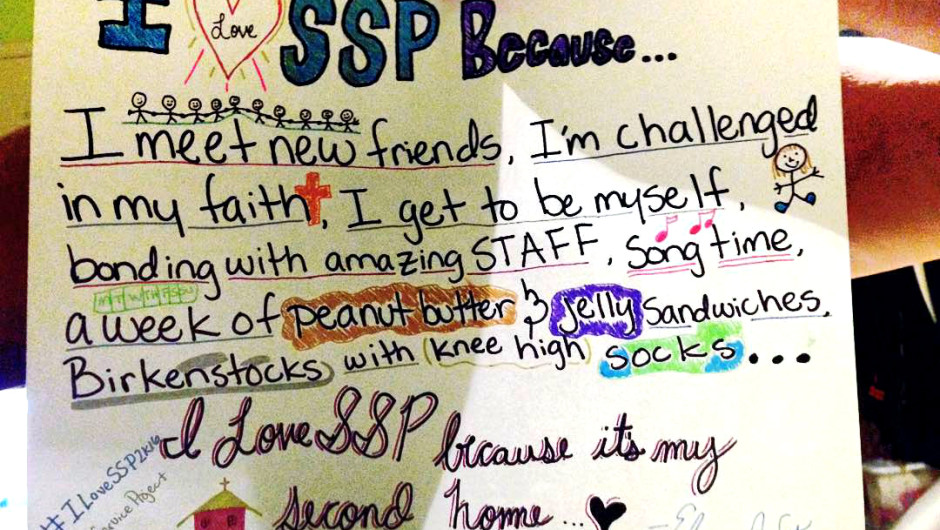 Why I Love SSP

Every Summer when I get home from SSP I’m always asked the same question,

What is Sierra Service Project and why do I love it so much?”

Well this is my answer. Sierra Service Project is my all time favorite church service trip that allows me to meet new friends, explore my faith, be myself, bond with the amazing staff, and most importantly help others. Sierra Service Project is not just about doing the work; it’s about getting to know the people and community you’re doing the work for.

We all get to know each other throughout the week and develop a bond that can’t be broken, we have to learn to trust one another and that we will have each other’s backs. 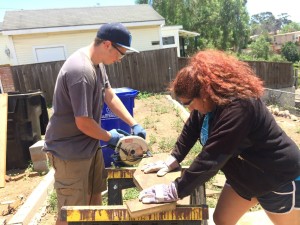 Eleanor being a great board buddy in San Diego, CA, in 2015.

An important part of Sierra Service Project is the amazing Staff, really, they have changed my life. 2013 through 2015 proved to be a really hard time in my life due to a handful of reasons and I felt lost in the world because I was losing myself and who I wanted to be. I remember summer of 2014 I attended Sierra Service Project in Chiloquin Oregon not feeling one hundred percent myself, one night I remember breaking down and in only a few seconds a camper and Staff member ran over and tried to help me calm down, it was when the Staff member asked me “would you like to pray about it?”, did I realize not only do I have these amazing people surrounding me but I have positive loving people that push me in my faith and to be the best that I can be. 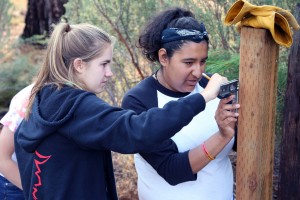 Editor’s Note: Eleanor won our “I Love SSP” Instagram Contest in November. She was awarded a $75 credit in SSP swag from the online store and a feature in our December edition of Inside the Margins. Follow SSP on Instagram for more opportunities like this!